New York, NY) Monday, April 4th, 2022 — Nathan R. Matthews is producing and performing in a concert for The Riverside Opera Ensemble at Merkin Hall at the Kaufman Music Center on May 16th. Tony nominee Christiane Noll (Ragtime) and Grammy winner Edward Parks (The (R)evolution of Steve Jobs)  will headline the concert of new music by Dreamworks composer Drew Fornarola and Matthews himself. 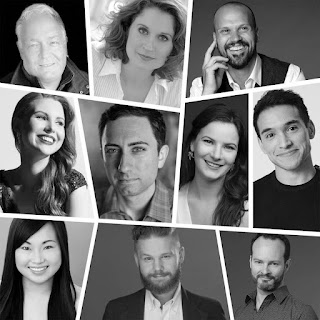 Parks will sing the role of Edmond Dantès, aka The Count of Monte Cristo, in extended excerpts of Matthews’s lyric drama, The Count of Monte Cristo, with libretto by Metropolitan Opera stage director, Stephen Pickover. Gaissert, Noll and Capobianco will join Parks. Noll and LaVerdiere will premiere Matthews’s song cycle, The Ruminations and Reflections of an Armchair Philosopher, a setting of six poems by Peter Haslett Kelly.

Rounding out the program will be songs by Fornarola, including a preview of his show in progress, #Dorian. Choi and others will perform Fornarola’s works. At a previous Merkin Hall outing, soprano Harolyn Blackwell premiered Matthews’ song cycle A Woman’s Plight.

Tickets are available at kaufmanmusiccenter.org or (212) 501-3330 for $55. Students and seniors may purchase $35 tickets at the box office. To purchase tickets, please visit the link below:

Nathan R. Matthews was Music Associate on Broadway for the Stephen Sondheim 75th birthday gala, Children and Art, directed by Richard Maltby, Jr.  and conducted by Kevin Stites. He is a contributing author to The Oxford Handbook of Sondheim Studies for which he wrote “Orchestrators in their own words: the sound of Sondheim in the 21st century”.  In collaboration with the composer and with director, Terry Berliner, Nathan conceived, orchestrated, arranged, and music directed It Goes Like It Goes, The Music of David Shire, a new music theatre work.  Nathan also directed and music supervised the initial USA production of Simon Stephens’s adaptation of The Threepenny Opera.

Nathan coached Mark Hamill’s keyboard work for Broadway’s Amadeus directed by Sir Peter Hall, worked on the music staff of the Santa Fe Opera, spent eight seasons touring the USA and Canada for Columbia Artists and Karlsrud Concerts, and music directed an Off-Broadway revival of They’re Playing Our Song. As Founding Director and Producing Artistic Director of The Riverside Opera Ensemble, he has developed and performed new works of music theatre and helmed events with the participation of noted artists including Leonard Bernstein and Harolyn Blackwell. Blackwell sang the world premiere performance of Nathan’s song cycle, A Woman’s Plight, set to poems by Edgar Allan Poe. He has served as Director of Music Theatre and Associate Professor at the University at Buffalo – SUNY and on the faculties of the University of Florida and The American Musical and Dramatic Academy (AMDA). His former students include two Tony Award winners, an Academy Award nominee, and an Outer Critics Circle Award nominated Theatre World Award winner. Nathan teaches and coaches privately in New York City and in Hampton Roads, VA.

Christiane Noll is a New York born, New Jersey raised actress received TONY and Drama Desk Award nominations and won a Helen Hayes Award for her portrayal of Mother in the Kennedy Center Revival of RAGTIME on Broadway. She starred in the record-breaking First National Tour of DEAR EVAN HANSEN. She made her Broadway debut creating the role of Emma in JEKYLL & HYDE, receiving a FANY award for Best actress in a musical. Ms. Noll received her second Drama Desk nomination for her work in CHAPLIN on Broadway. She has been seen perennially as Sister Margaretta in NBC’s THE SOUND OF MUSIC LIVE with Carrie Underwood and she supplied the singing-voice of Anna in the Warner Brothers animated feature THE KING AND I. She has also enjoyed starring in Broadway productions of ELF (at Madison Square Garden), IT AIN’T NOTHIN’ BUT THE BLUES and on tour in URINETOWN (Ovation Award), THE MAMBO KINGS, GREASE!, MISS SAIGON and CITY OF ANGELS as well as a tour of Australia and Thailand of SOUTH PACIFIC. With a reputation for great versatility, Ms. Noll has performed a varied repertoire in Broadway, Operetta and Jazz. She has been a frequent guest soloist with symphony orchestras in every state in the USA, as well as international appearances with Toronto Symphony, Vancouver Symphony Orchestra, Jerusalem Symphony, Sinfonica Brasileira in Rio, China Philharmonic with concert pianist, Lang Lang and orchestras in Hong Kong, Czech Republic and Kuala Lumpur, Malaysia. She made her Carnegie Hall debut with Skitch Henderson, in his last pops performance with The New York Pops and sang with Steven Reineke SONDHEIM! THE BIRTHDAY CONCERT at Carnegie Hall. She made her Hollywood Bowl and O2 Arena debut singing with Julie Andrews in GIFTS OF MUSIC and her opera debut with Placido Domingo in THE MERRY WIDOW at the Kennedy Center as well as operetta performances in City Center Encores! THE NEW MOON, THE STUDENT PRINCE, THE PIRATES OF PENZANCE and THE MIKADO. Ms. Noll has premiered shows Off-Broadway and regionally: SNOW CHILD, OCTOBER SKY, City Center Encores! 1776, John Kander’s KID VICTORY, THE COTTAGE, THEY’RE PLAYING HIS SONGS, ACE (Helen Hayes nomination), THE WITCHES OF EASTWICK, THE PIPER, FRANKENSTEIN, KEPT (Krieger/Russell), CALL THE CHILDREN HOME, A FINE AND PRIVATE PLACE, TAKE FLIGHT (Maltby/Shire), LITTLE BY LITTLE and LIZZIE BORDEN. And happily starred in favorites NEXT TO NORMAL (Connecticut Cristics Circle award), FOLLIES (St. Louis Critics Circle award), CLOSER THAN EVER (Off-Broadway Alliance award), BEAUTY AND THE BEAST, MARY POPPINS, 1776, THE KING & I, LITTLE SHOP OF HORRORS, INTO THE WOODS, MACK & MABEL (Connecticut Critics Circle Award), THE BAKER’S WIFE, THE SOUND OF MUSIC (Salzburg Marionette Theare), and CAROUSEL.

Christiane has performed her solo shows in cabaret at 54 Below, The Metropolitan Room, Birdland, The Regency, The Nikko, The Plush Room, The Duplex, The Nevermore, Arci’s Place, The China Club, Peaches, B.Smith’s and The West Bank Café as well as appearing in Town Hall's BROADWAY BY THE YEAR and the Lincoln Center's AMERICAN SONGBOOK SERIES.

Along will many cast albums and compilation recordings, she has released five solo CD’s, CHRISTIANE NOLL – A BROADWAY LOVE STORY and THE IRA GERSHWIN ALBUM, both on Fynsworth Alley, LIVE AT THE WESTBANK CAFÉ on 2Die4 Records, MY PERSONAL PROPERTY on Jay Records and GIFTS – LIVE AT 54 BELOW on Broadway Records. Christiane is a graduate of Carnegie Mellon University.

Blythe Gaissert is a Metropolitan Opera mezzo-soprano. Gaissert is one of the preeminent interpreters of new classical music, has a "pure, powerful and appealing voice and a forceful stage presence to match" (Denver Post). A true singing actress, she has received critical acclaim for her interpretations of both new and traditional repertoire in opera, concert, and chamber music.   In her critically acclaimed 2021 debut album HOME, comprised of world premieres written specifically for her, and that reached Number 1 in the Billboard Classical Charts, Gaissert "holds forth, like a boss." (The New Yorker) An avid collaborator, Gaissert has long been associated with composers Laura Kaminsky, Ricky Ian Gordon, Kamala Sankaram and Mikael Karlsson, among others. Recent premieres include the lead roles of Katharine Wright in Kaminsky-Fellows Fineberg's FINDING WRIGHT (Dayton Opera) and Georgia O’Keeffe in Kaminsky-Campbell-Reed's TODAY IT RAINS (Opera Parallele/American Opera Projects); Linda Larsen in Kaminsky-Reed's HOMETOWN TO THE WORLD (Santa Fe Opera), Sadie in Gordon-Hoffman's MORNING STAR (On-Site Opera), Dorothy in Sankaram-Handel's LOOKING AT YOU, and Walker Loats in Karlsson-Kunnos de Voss-Walat's THE ECHO DRIFT (American Opera Projects/Prototype Festival). In its 50+ productions since 2014, Gaissert is the most frequent interpreter of the role of Hannah After in Kaminsky-Campbell-Reed's groundbreaking AS ONE. Gaissert has also performed with New York City Opera, San Diego Opera, Los Angeles Opera, Cincinnati Opera, Des Moines Metro Opera, Lyric Opera of Kansas City, Opera Colorado, Opera Columbus, Opera Idaho, Opera Memphis, among others. International appearances include at the Aldeburgh Festival, Lyrique en Mer Festival de Belle-Ile, and Orquesta Sinfónica y Coro RTVE.

Edward Parks is a recipient of a 2019 GRAMMY award for Best Opera Recording (Steve Jobs in The (R)evolution of Steve Jobs), baritone Edward Parks made his Metropolitan Opera debut in the 2009-2010 season as Fiorello in Il barbiere di Siviglia and has since appeared there as Figaro in Il barbiere di Siviglia, Schaunard in La bohème and as Larkens in La fancuilla del West, which was broadcast in HD worldwide. Notable upcoming opera engagements include Jack Torrence in The Shining with Opera Colorado, a return to Lyric Opera of Chicago for Proving Up, Marcello in La bohème with Michigan Opera Theater and Boston Lyric Opera, and the world premiere of Omar with Spoleto Festival USA. Highlights from past seasons include Steve Jobs in The (R)evolution of Steve Jobs with Santa Fe Opera, the Count in Le nozze di Figaro with Hawaii Opera Theatre, a return to Minnesota Opera as Audebert in Silent Night, revivals of his Escamillo in Carmen with the Seiji Ozawa Matsumoto Festival in Japan and Atlanta Opera, Valentin in Faust with Lyric Opera of Chicago, Portland Opera, and Opera San Antonio, Inman in Cold Mountain with North Carolina Opera, and Belcore in L’elisir d’amore with Opera Oviedo in Spain. On the concert stage, Mr. Parks made his Carnegie Hall debut in an evening of songs by Charles Ives, snag Orff’s Carmina Burana with the Prague Proms International Music Festival and the Czech National Symphony Orchestra, debuted with the Atlanta Symphony Orchestra in the Duruflé Requiem, and performed Schubert’s Winterreise at Carnegie Hall’s Weill Recital Hall.

Merkin Hall’s innovative programming, intimate scale and near perfect acoustics have earned it a reputation as one of New York City’s finest concert venues. Noted in the New York Times for its “reputation for avant-gardism of a cool and cerebral nature,” Merkin presents adventurous work—including many world premieres—by contemporary composers and some of today’s most acclaimed and inspiring performers. In addition to cutting-edge new music, Merkin Hall presents some of the best new talents in the classical world, celebrations of musical theater with Broadway’s top professionals and lively musical revues for children and families. Signature series include Broadway Close Up, Tuesday Matinees, Ecstatic Music, What Makes It Great? Merkin Hall is a division of Kaufman Music Center, a non-profit music education and performance organization that is also home to Lucy Moses School, a community arts school for all ages; Special Music School (P.S. 859), a public school that teaches music as a core subject; and the acclaimed youth new music program Face the Music.